Stu is starting the show as usual, while the last of the audience are finding their seats, strumming some old folk song on his acoustic guitar, like a shadow in the night, then we can see George get behind the drums, then Charlie & Don finding their instruments, all dressed up and ready to go. Mr Dylan comes last, almost jogging, makes a short round on the stage, looking at the audience without looking at the audience, looking sharp in white hat, black suit with purple stripes on shoulders, arms and legs.

From the start it´s obvious that the sound is crispy and perfect tonight, and Dylan is in great voice from the start. “Things have changed.” He loves playing “Highway 61 Revisited”, the first highlight of the evening, with great phrasing and conviction, he loves to rock tonight, and there might be some signals in this set that the rocking side of Bob Dylan maybe is growing back, little by little. Not only in the uptempo songs, but also in the way he moves on stage, the way he growls here and there, even in the standards, like in the WHYYY in “Why Try To Change Me Now”. The high energy, Dylans fighting spirit and great conviction sets the tone from the start, and “The Guilty Undertakers” follows him as the loyal soldiers follow their captain, deeply serious and without smiles. Except Don Herron of course, he hasn´t learned how not to smile. 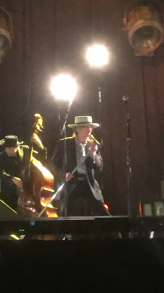 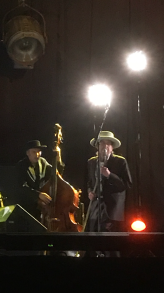 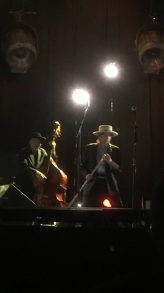 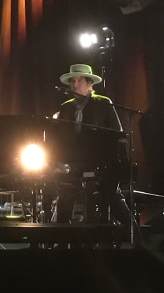 The audience are not a bit reserved this night, they´re clapping and cheering from the start, both for Bobs timing and phrasing when he sings, and for his inventive pianoplaying, that gets stronger and more confident as the tour moves on. It´s deeply original and rhythmbased, and it´s highly daring because Dylan can impossible know the end result of each experiment he starts. Tonight it´s all good.

“Why Try To Change Me Now” is beautiful and well received, both for the singing and for the sentiment, before the thundering “Pay In Blood” shows us the rocking Bob once more. The long intro to “Melancholy Mood” gives time for Bob to do his chaplinesque dance routine, where he stands between bass and drums, Tony & George, making his own kind of careful and understated dance to the wild cheering from the audience. He is doing his mystic semaphore with his hands, like it´s a secret language between him and the band, and the band is listening closely with their eyes.

“Duquesne Whistle” works well also tonight, and the piano player tries not to look as happy as he actually is, during his solos – a song and an arrangement that on a good night shows all the abilities of what Dylan wants from the band, these days especially highlighting Charlies sophisticated solos.  Dylan´s feet under the piano conveys his feelings, the thin legs are hammering like drumsticks, sometimes it´s like there is another puppet master holding the strings to his legs, which seemingly are living their own life of joy.

The chaotic intro to “Stormy Weather” is in itself a way to describe the storm that is rising in strength. Dylan delivers a dark, great and passionate version of the song: “Life is bad/Gloom and misery everywhere/Stormy weather”. Why shouldn´t he sing this song, he always loved songs that doesn´t pussyfoot around and who don´t turn a blind eye to human nature. As enigmatic Dylan is, it´s always about opening up, finding new land, searching for new truths in new songs, his own or others. That´s some of the beauty of seeing several shows, to see that this artist never stops searching for phrases, in words, in phrasing and in playing. Even if the set is set, he continues the work of exploration. He is like a painter. Actually, he is a painter.

Earlier in the day I went to the Halcyon Gallery to see Dylans last installation of silkscreen paintings and ironworks, and once again it´s so obvious that he works the same way in different areas of his artistic life. Like the different versions of endless highways & lonesome train tracks, evolving from a simple drawing or his own or others pictures, then in each version, or even sometimes in one version, putting on layer on layer of colors and moods, shaping and reshaping, striking another match to maybe get to the end of a rainbow. Like he does in song each night. Not always succeeding, but always searching. This night he succeeds mostly in all songs. We can see him paint. I always loved the “Life Lessons” part from “New York Stories”, where Nick Nolte as the emotional painter in one scene literally explodes in colors and strokes to the tones of the “Before the flood”-version of “Like A Rolling Stone”. Great art, in all ways of the words.

Just like “Early Roman Kings”, it´s like it´s reached a new high level. For me, it was one of the weakest tracks on “Tempest”, great, but nothing special, musically too much a rip-off from earlier blues masters, but lo and behold, see what´s happening, live it comes to live, Dylan paints it again and again, until it´s, like tonight, is all Dylan, reshaping it till he gets to the inner core of what the song maybe always was meant to be. He might find it each night, but oh, are we lucky, to be there this night and see the wet paint glisten when the song ends.

Just like “Tangled Up In Blue”, where Stu Campbells guitar invites us into the illusion that this is about going down in the same river twice, but it´s not. It´s familiar, the audience always cheers at the start, but it´s a song that has been changed time after time, both in arrangement and words, to fit the purpose and the existential sentiment of the artist this night, this tour, this part of life. Like in the last verse, were the ageing singer has made a total rewrite of it:

Well, now I’m going back again, I got to get to them somehow.
Yesterday is dead and gone and tomorrow might as well be now.
Some of them, they went to live upon the mountain.
And some of them went down to the ground.
Some of the names were written in flames
And some of them, well, they just left town.
And me I’m still on the road trying to stay away from the joint.
We always felt the same, depending on your point of view.
Tangled up in blue.

It´s not alone a question about whether the original is the better verse, but this is the Walt Whitman of our time that is working with his autumn leaves of grass, instead of just leaving it.

Today we also learned the sad news that Willie Nelson aren´t well, and that he might not be able to make the outlaw tour with Dylan this summer. Let´s pray he is getting better. Nevertheless, both their names are written in flames. It was never just about leaving town for any of them.

I haven´t been to one single show the last years were “Love Sick” wasn´t one of the highlights. It´s still like this. It´s a song as deep as it gets, and this year Dylan has made a softer and sadder version of this most perfect “looking-back-on-lost-love”-song, (a fitting companion to the first album of “Triplicate”) less a rocker than the powerful ending of the shows in 2015, but deeply touching in a more quiet way. The audience loves it. It speaks to all of us with it´s perfect ending to a perfect song, loads of wisdom and love distilled into it:

The funky groove of “Desolation Row” makes the audience whisper of delight, it´s like everybody understands that we´re in for a treat, and they´re right. The complex mosaic of the universe of the song is quite the opposite of the short lines in “Love Sick”, but with Dylan it´s all, and nothing but all. He loves to play this song, and it gives him all the space he needs to demonstrate his upmost capacity of timing and phrasing, both in vocal and on piano. Another highlight of the evening, maybe The Highlight.

“That Old Black Magic” is so much fun, for all involved, the audience, the musicians and for Dylan himself, even if the exhausting Louis Prima-arrangement of the song is most demanding, but Bob is standing, and dancing, a really cool cat in the eye of the storm.

The main set ends with majestic and dramatic versions of “Long And Wasted Years” and “Autumn Leaves”, and Bob leaves us alone for a few minutes – he knows that we knows he´ll be back. In “Blowing In The Wind” he finds a new way for the piano part, and the band follows him when he is embroidering it in to its ending.

And then – the finale – Dylan is standing with the piano – “Ballad Of A Thin Man”. There are many moments of todays shows where you can see an old man in the making, but this is not one of them. He is fearfully rocking sharp when he attacks another nobelprize-worthy song, a true classic in the way that it´s fresh and to the point of no return, demonstrating in full that this is a man young at heart, even if he´s back might be hurting. An extremely powerful version, the best I´ve seen so far this tour. The audience are standing, cheering and waving – a really good crowd this evening.

Tonight Bob shined like a crazy diamond. How can he top this tomorrow? A new song?