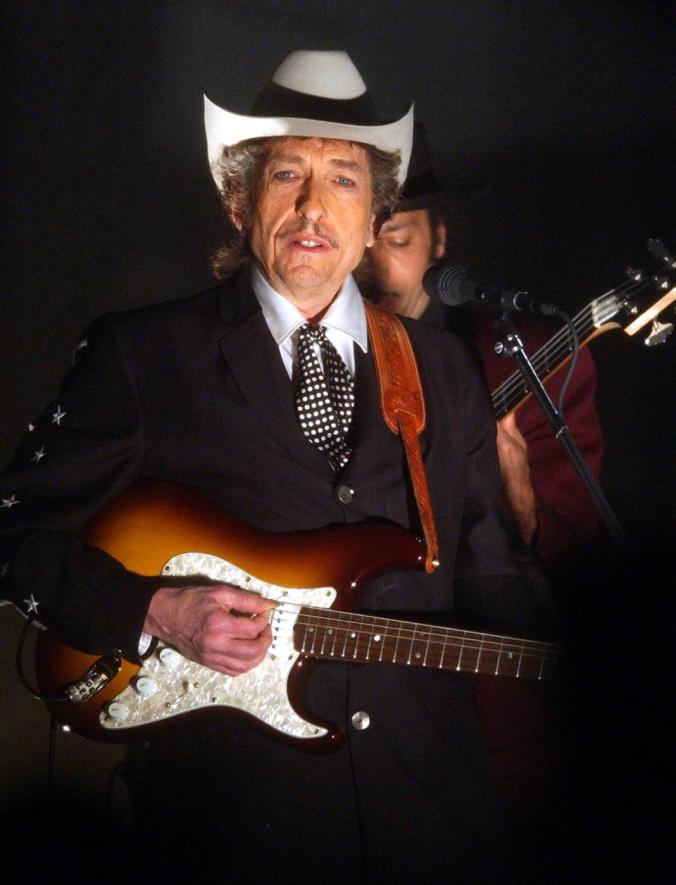 Did Bob shoot a man named Gray and take his wife to Italy? Is it true? And
did Gray survive the shot?

If not, why is it that the great and seemingly surviving Michael Gray uses
so much effort and passion to put Dylan’s performing art down in his
report from springs opening show in Stockholm, “On the trail of the
Bobcat”? After using most of the article to critizise the arena, the
audience, the audiences income, hairstyle, age, the fact that people shows up with their sons and their daughters or their parents – Gray uses just a few lines to write Bob off as a cynic, a fake, safe-playing self-parodic and painfully poor wooden Dracula-figure “who wants fresh meat: young people who don’t remember how incomparably better he once was”. Grays review of the concert bears the resemblance of many a Dylan-review over the years, though often written by ignorants who don’t know or accept Dylan’s demanding work and style – and we shrug our shoulders, knowing that they don’t have a clue. But this writer should know better, shouldn’t he – or is this a result of a common disease for the heylins and the grays of dylanology – who don’t really accepts the live and living Dylan, with all his strong and weak sides, preferring the historical Dylan that can be analyzed, categorized and finalized in the Book with a capital B? How can the living Bob one single night live up to these expectations? Do they really want to see the Legend and not the Man on the stage? They will surely be disappointed – as far as I’m concerned the never-ending tour is all about the legend taking his life back, in public.

I was in Stockholm, too. It wasn’t a perfect show, maybe not even a great show. Bob looked more than a year older than last summer, he looked tired – but maybe it was just a bit of jet-lag, and a bit of that pressure the first show on a tour supposedly can bring: “Is everything okay? How are the boys playing? Will I make it this time, too? Am I getting too old for this?” Human thoughts may occur, even in Bobs head, I suppose. But it did work out – it was a good show – with highlights and surprises and a good time with great music, all kinds of it. The band played on – good time Charlie got the blues and played guitar like the devil. The heavy treatment of “Man of Constant Sorrow” with Bob living the blues and sneering the words – I’ll never forget it – the story of his life, indeed. And the disbelief when we got a familiar intro, but could it really be…. yes, it was “Solid Rock”. And yes, it was solid rock. “Tweedle Dee and Tweedle Dum” and “Summer Days” fits the band like a glove, and we got a beautiful and tender “To Make You Feel My Love” with great harmonica intro. And what about the majestic “Sugar Baby” – Where was Michael Gray? It was a good show, with more than enough magic moments to justify the trip from Oslo, and with the unique power to give us expectations of an even better show in Oslo two days later, maybe with Bob leaning a little more forward, a little more of his left-foot-dancing and of course, a completely different setlist. And that’s exactly what we got. Dylan has been quoted saying that the critics shouldn’t compare “Love And Theft” too his old albums, but it should be compared to other albums released nowadays. Maybe the shows should be treated the same way? Where else can you go to get this energic multidose of blues, gospel, country, bluegrass, jump-swing, ballads and rock’n roll combined with classic poetry. Of course there’s great artists on the road today, but still, and even when you accept the limitations of Bob, few is even in the same league.

And Michael, when did the audience start to reflect the superiority of a Dylan show – would you prefer the puritanism from the early sixties, the hecklers from ’66 or the booers from ’79?

In Oslo Bob kicks off the show with “Wait For The Light To Shine” – his prologue to the post-September-11th-shows in US this autumn, a nod to Hank and a word of hope, even in the darkest hour. A perfect starter for a really great show – I mean –  Hattie Carroll, Desolation Row, Visions of Johanna, Mama You Been On My Mind – in the same show…. hello!!! A surreal Don’t Think Twice, a killer version of Summer Days, Charlie’s on fire, Larry joyfully jazzes his guitar on Floater. And what about the thunderous Lonesome Day Blues: I’m gonna spare the defeated, I’m gonna speak to the crowd. Rolling thunder – and Bob sends beautiful smiles back to the drummer, just the glimpse of the same smile reaches the audience, but the crowd’s response is explosive and warm – both the bobcats and the first-time-to-see-Bob-passengers. And Bob seems happy and free.

Michael Gray is wrong – generalizing from the Stockholm show, from any show, it ain’t right. It’s not lack of neither knowledge nor musicality that makes american audiences vote Bob to best live act for the autumn shows, that makes the norwegian audience leave the arena with happy smiles. They’re not victims of a fake – they’re witnesses to something really real in a world of fake. Maybe incomparably to whatever he has done before – but still comparably to whatever’s going on in a concert hall these days – Bob’s still on top of his game – and we are lucky to be alive at the same time!